March 13: The high cost of living

I have just been in touch with West Bank ISMer A to find out how ISMer Tristan is doing, after he received a severe injury yesterday when the tear gas canister an Israeli solider shot at his head created a hole (see footage here). Apparently he is still in critical condition and has had to have the front part of his brain removed. If he makes it through the next 48 hours his chances of survival increase. There will be long term effects but not clear yet how severe.

Tristan is an activist and Indymedia journalist and you can see some of his reports here, including an article entitled Four Demonstrators Shot and Wounded in Ni’ilin, Palestine. The local man shot in the leg with live ammunition at the same time as Tristan was hit, is ok and back at home in Ni’lin now.

When we think about the danger we sometimes face (always less than Palestinians) we hope for the clean, quick bullet. And try not to think about the alternatives. I don’t know Tristan myself. He seems like a nice guy in the photo, doesn’t he, which looks to be the photo we all hand in for use “in case something happens.”

Back here, Ma’an (which can be entirely accurate or entirely innacurate) reports: “a Gazan boy was shot and injured by Israeli soldiers stationed east of Rafah city Friday, said Head of Emergency and Ambulance Department in the de facto Ministry of Health, Muawieyah Hasaneen. Thirteen-year-old Salah Abu Sneina was brought to hospital with moderate injuries after being shot near the Ash-Shuka area, where Israeli forces are deployed near the southern border of the Gaza Strip. Abu Sneina is the eighth Gazan to be injured by Israeli fire in the past week.” There have been attacks from sky and sea all week, mostly (but not all) focused on the tunnels which feed us.

The price of fish...

Yesterday I went to the Kabariti family for Friday lunch, a fish barbeque. I took with me three of the “letters from the world” that were delivered by the Free Gaza boat last year. These letters were from a mother and her two daughters in California, so we decided to give them to the Kabariti girls and their mum, all of whom read English. 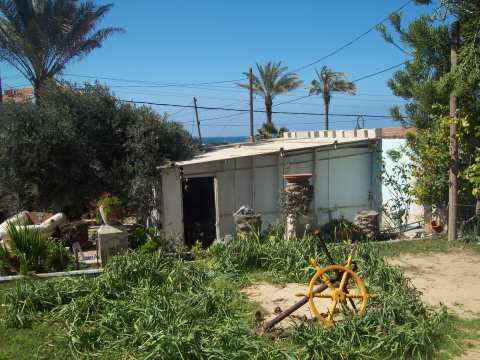 The Kabaritis' garden overlooks the sea

The girls and I sat in the sunny front window and they excitedly began to read their letters and compose messages to email in reply (no postal service is possible under siege.) A few minutes later I realised I could hear shooting. Their dad M always keeps binoculars beside the sea window, but I didn’t need them. Looking out, I could see two Israeli gunboats well on this side of the horizon, looping about and firing on Palestinian fishing boats. No more than three miles from the shore. 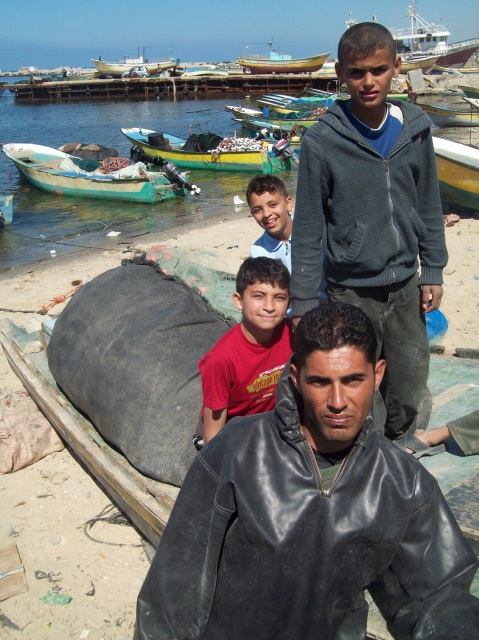 Some of the little boats began to head back to the port, so I stomped off down the street to meet them, as the shooting continued, to see what I could find out. I spoke to Ahmed Abel Aziiz, who had just tied up his boat. He said the shooting had been going on half an hour and he was giving up for the day, but he thought that more than ten boats, some medium and some small like his, were still out there. Nobody was arrested or wounded yet. I stomped back to eat my lunch, pleased to see the Kabariti kids out in the garden after their weeks of hiding inside, but eyeing the parsley in the salad and the fish on my plate with part respect and part despair. 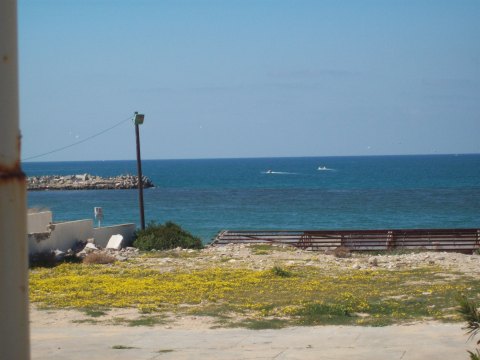 Later on I rang M and he said that fishermen Zaki Tarouch and Talal Tarouch, and Dahr Zayad and his son, had been arrested by the Israeli gunboats. He also said we are entering the three best months for fishing, the time the fishermen depend on to get them through the rest of the year.

We went to Al Wafa Rehabilitation hospital also yesterday, said hi to Abd, delivered the chess set your donations bought him, and announced we would be practising both chess and insertion of cannulas on him next visit. He looked perturbed. E introduced me to Abd’s fellow patient, Maher, who you can assist via our Donate page (shot fisherman Rafiq is there too) who is carrying on the Palestinian tradition of being determinedly cheerful after surviving his own war nightmare. Which in his case involved not only losing those close to him, but ten minutes in the morgue refrigerator…

View from Al Wafa: buildings on the horizon are on Israeli side

The fishermen were released in the night, but their boats – their method of earning a living – have been kept by Israel. As we enter the three months Gaza fishermen depend on the most.