A South African teacher who reads this blog asked yesterday: “I’ve heard that everyday people are still being killed in Gaza, is this true?”

Yes. Almost every day there are further injuries, and often deaths. And as usual, the majority of the time they are civilians. On Saturday Feb 14, I was talking to medic friends on duty at Al Quds hospital, and they broke off the conversation to run to their ambulance; I just caught the words Al mina – the port. Two ISMers went later to interview the fishermen who had come under attack from shooting from Israeli gunboats at 3 miles out. The injured fisherman, Rafik Abu Rayala, had shrapnel in his back which had resulted in internal bleeding. You can see just how much a threat his small boat wasn’t, here.

Two days ago we heard there were six injured in an attack in Shatr camp, this was an attack from gunboats at sea. Some of us today visited one of them in Shifa hospital: Ali, a 19 year old who was walking with his friend on the beach. They saw the first rocket coming, ran, and escaped it. The second one got them. Ali has lost one hand and three fingers on the other hand. One of his eyes was saved despite damage, the other was destroyed and the wound is currently infected. Multiple pieces of shrapnel have wounded his face and other areas of his body.

Farmers and fishermen fear attacks every day, but what choice do they have? The fish, and the cropland, are where they are. It’s the Gaza sea and Gaza land, but this makes no difference to Israel apparently. We’ve been accompanying farm workers in Abassan Jedida, Al Faraheen, for 7 days now I think it is, and on 4 of them, including yesterday, we were all shot at.

You’ve already seen the footage of the Feb 5 shooting, and we also now have footage from February 12, again at Abassan Jedida. What you’ll see in this footage is how clearly unthreatened the soldiers feel by our presence, in terms of their own safety. Six or seven of them were visible to us between the episodes of shooting, as they wandered about between the jeeps and the tank. And that day they had actually left us alone til we finished our first field, not shooting until we’d moved to the second field, that was in fact a little further away from the border than the first one. There is no logic to any of this. 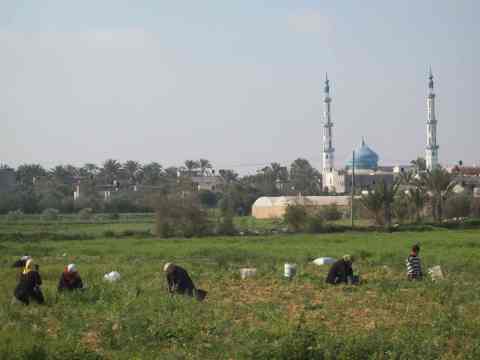 Women picking beans next to the field Anwar died in

On one of the days we were there, February 7, we went to the beanfield next to where Anwar was killed. The men had started early in the hope the army wouldn’t be out to shoot at them yet, but still the shooting had started before we arrived at 8am. So then the women went out instead, but they were pretty scared, and only decided to continue because we were there. Work finished without further shooting.

Anwar's cousin showed us where Anwar lay, shot and bleeding

Yesterday, February 15, we had a small victory. Three jeeps and a tank delivered soldiers who shot at us for a while, not as close or as enthusiastically as other days, but ignoring any bullets in your vicinity requires courage. The farmers stayed on the land. After a bit, the jeeps and the tank left, and the farmers worked until they were done for the day.

After that we went to visit our friends J and L in their temporary village centre house. They insisted on feeding us a lovely lunch, mostly from their own hard-won produce, before we accompanied them to their regular house and land on the edge of Al Faraheen, facing the border. They don’t feel safe it’s safe enough to live there now. It was here J had been shot at the other day, only hours before Anwar was killed. Yesterday he had asked for our presence and help while he sprayed his onion crop and harvested radishes. We realised the neighbouring village we could see from his fields was Khoza’a, hit so hard during the war. Was it being beside the Israeli border they were being punished for too?

Faraheen's communal stove - almost as beautiful as their mosque

The same day we were with the women as they picked beans, Al Faraheen folks were proud to show us the communal bakery they’ve recently built, opened for its first day of operation. For one shekel (about 20p), you can bake ten pieces of bread that you’ve made at home. This is a response to the gas shortage that makes it so hard for families to keep themselves individually in bread.

This afternoon, we went out to Beit Hanoun, to the same area Manwar’s house is/was in, to be an international presence to assist some farmers move their bees, as they too are now in an area they considers too dangerous to visit regularly. Inevitably: more shooting.

Language and time limitations mean I am not able to always let you know details of the continuing injuries and deaths that are happening here as a result of continuing Israeli attack. Often, we will hear explosions, and it will take a day or two before we find out accurately what they were and who they affected. This week I am going to resume a regular weekly ambulance shift so that I can keep some level of awareness and witnessing. But sadly, whether you hear about them from me or not, you should assume these injuries and deaths continue, because in Gaza, this is what Israeli Occupation looks like.

2 Responses to Feb 16: Almost every day