Yesterday E and I went back to see Amer at his Zaytoun house. He told us his brother Abdullah is back home from the Egyptian hospital, and showed us his hospital records; his wounds (two shots to abdomen, one to arm), are healing ok. He was worried about Saja, his 6 year old, though, it seemed he thought the gunshot wound to her arm wasn’t healing properly, and he wasn’t sure if he could get an overworked doctor’s attention under current circumstances. E already had some links with doctors at Al Wafa hospital in Shayjaiee, where the Al Helou family are staying with Shireen’s sister’s family, so she called Dr Tariq and asked if he would see Saja the next day.

Amer has a lot of friends dropping by when he is at his Zaytoun house, they don’t want him to be alone.  One of the young men here  lost his brother, as Amer lost Mohammed. Amer told us Mohammed’s wife is 4 months pregnant.

One of the friend made us a wonderful makluba dish for lunch, with virtually no facilities. E told us how she thought this was solely the name of this chicken and rice dish, and couldn’t understand what it meant when someone said his room was all maklubah. It actually just means “upside down.” Luckily while we ate, the wind was blowing the right way. When it’s blowing the wrong way, everyone still trying to live in a semi-rural area like this has to deal with the aroma of rotting chickens, cows, and sheep, killed or starved during the attacks.

Today E and I met Amer and Saja in the Shayjaiee market to go to Al Wafa Rehabilitation Hospital. Saja is a finely boned child with a solemn face, who kept close to her dad, even sitting as far forward on the taxi back seat as she could  in order to be near him in the front seat. When you remember she saw her grandad and baby sister killed, it’s not surprising. She was sucking a lollipop and wasn’t willing to open her mouth to say a word for some time. When we got back to her home later and she was with her relatives and her little brother Mohammed (her other brother Foad was at kindergarten) she relaxed and drew some pictures for us.

Dr Tariq is a kind man, but Saja (as you can see in the above photo) was suspicious, and she had reason, as the examination unavoidably had her crying in a lot of pain. The wound has healed on the outside, but there do seem to be some internal problems, and a further operation might be required.

I learnt in my early visits to Palestine not to admire anything that Palestinians have that they could physically give to you, because they will. I try to limit my compliments to things that are bolted down, and children. But I slipped up today… when Shireen arrived, E and I both commented on how much we like her clothes, and that we’d like her to show us where she finds them. She immediately went into the back of the house and came back with two of her shirts, one for us each, for which she would accept no refusal.

By the end of the visit, we’d also collected a commemorative Palestine sash from one of her friendly family members, and some High Energy Biscuits from the World Food Programme, which were apparently a Gift of Norway before they were a gift of Shireen. I felt that I wasn’t really keeping up my end of things with the halva I’d brought them, but it made Shireen smile, because Amer had yesterday joked that my bag had a supermarket in it, after I’d pulled out cashew nuts followed by maramaya (sage) for the tea, yesterday. (These things are, by the way, funded by you, my kind donators.)

We asked Amer about work, he said before the attacks he delivered bread in his van, but now he couldn’t do this job anymore. You’ll see why in this picture of house and van.

E and I said that we would let folks who read our blogs know they can make donations to go towards medical treatment Saja might need, if they would like. She’ll be assessed on Thursday and then we’ll let you know, and we’ll try to sort out Paypal if we can. I *think* we can convince Amer and Shireen to accept this, after several battles over several days I managed to pay for our taxi today by saying “it’s not my money, but donations from people outside that I’m paying with”. (It’s actually a bit of both. I hope Amer doesn’t read that. He has a sneaky way of shaking hands with the driver and simultaneously passing shekels over when we’re not looking.)

While we were at Al Wafa, there was gunfire about every 5 minutes. Apparently the army constantly firing over the border is normal there. This is another hospital that was attacked – as you see. There were normally three patients in this room, but luckily they had evacuated this side of the building and moved everyone to the other side when the rocket went in one wall, through the room, and out the other. I believe there were other hits too. 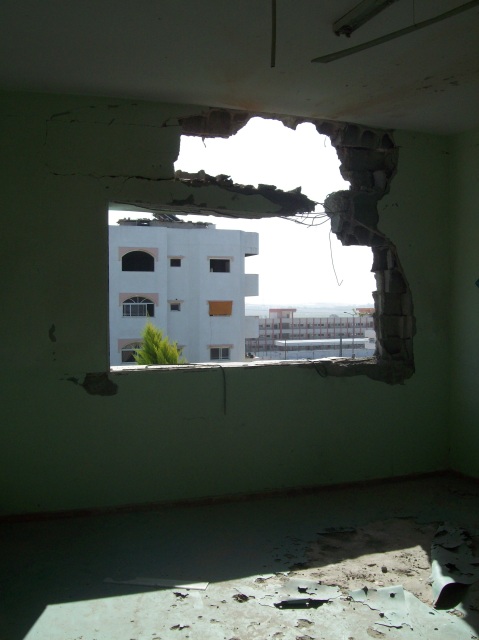 While we were there, E took me to meet Abd, whose case she took up when she was in Egypt. He’s 18 now, and he was shot by a sniper in the March 2008 invasion. He had gone up on the house roof to find out why there was no water from their tank (that was also because of sniper shot it turned out.) He was shot in the spine, and it was a little while before his family realised he was missing. He was sent out to Egypt for treatment, and was in a pretty bad way when E met him, emaciated, with bed sores, cut off from his family, and having been shifted round 5 Egyptian hospitals.

The advice E was given was to try to arrange his removal back to Gaza, which surprised her because of the siege conditions, but then she learnt about the good quality long term care available at Al Wafa. She was a key part of getting Abd home, and he is now greatly improved physically and has had some visits home. However the 3 solicitous doctors clustered round his bed were telling us that he is very dispirited.

It seems to have hit him he will never walk, and he is grieving for the life he won’t have. Al Wafa staff are doing their best to show him the life he can have. How many more young people there are like him after these last weeks, with so much lost. We wondered if we could ask E’s friend AK to visit Abd. AK lost both his legs, but he is a very strong, positive, and witty man.

5 Responses to Jan 27: At Al Wafa – Saja and Ceasefiring