Today I met with my friend Reem. She is 21 and works with Mercycorps, and we met when she came to interview me after I arrived on the initial FreeGaza trip. She was so bright and sparkly then, and I know that is still in her somewhere, but right now she is very fragile. She didn’t realise I was back in the country until last Thursday, when her family was one of the many fleeing attack to Al Quds hospital, and we collided amidst the chaos. Today she told me about what happened to them.

Tuesday night, we had stayed with my uncle elsewhere, because the attacks were so bad. But Wednesday we went home, because it was home. Also we heard that the bombs Israel was using (phosphorous bombs) set things on fire, and we thought if we were in our home we could put out small fires before they burnt everything. We just didn’t realise how bad it was going to get.

Wednesday night was terrifying. The bombing, the shelling – my mother was shaking and reading prayers. We realised how dangerous it was there on the 5th floor, but we were too scared to go downstairs because there were windows all the way and we were afraid the Israeli soldiers or the planes would see us and shoot. My uncle lives on the ground floor, he has two daughters of 6 and 1 1/2, my grandmother lives with him also. He called us and said, come downstairs, but we said we just can’t. Next thing we knew, he’d come upstairs to get us. He actually went all the way up to the 7th floor by accident, and had to come back down to us to bang on our door. So we took blankets and went downstairs with him. We kept thinking – at 4am it will stop. Maybe at 6am it will stop. Because usually the army withdrew by then. We didn’t realise they were just continuing to move towards us this time.

Some hours later, my aunt looked out the window and saw a tank; it was pointing directly at our windows. That’s it, in a moment the shells will hit us directly, we’re dead, we thought. But something happened and it turned away from us. I called Mercycorps and asked them to call the Red Cross and ask for help. But we realised we had to escape immediately, to try to get to the hospital because maybe it was safe. We couldn’t go back to the 5th floor for our day clothes or our passports or IDs. My brother was so worried because if the soldiers got him with no ID, they would shoot him. But everyone in our building said, we have to go NOW. But we knew the snipers had just shot a man and his daughter (Haneen Al Batran and her father).

We went outside, we had small children with us – some of the little ones could barely walk but they had to if there wasn’t anyone to carry them. Then I saw you, and the other Red Crescent people coming; my brother was helping my grandmother but she can’t walk, she fell, and he stopped with her though he was sure he would be shot. Then you went to help them, so me and the rest of the family went on into the hospital. But inside, we waited for 10 mins and my uncle and my brother and my grandmother didn’t arrive, and we were sure they were dead. We checked the basement but we didn’t know it had two sides. I started to cry. Mum was shouting at everyone – did you see them, did you see them?

Then I saw my brother and I shouted “where the hell have you been!”

After some hours they said everyone would evacuate from the hospital and go to the UNWRA school, but we had to walk and Israel only gave permission for two ambulances to go with the hundreds of people. It’s a long way and my grandmother can’t walk. I didn’t know what we could do, if she had to stay we wouldn’t leave her. But then we got a wheelchair for her so we could push her. I was carrying someone else’s child because her parents had their other children, she was afraid not to be with them so she cried all the way; she could see how scared we all were. I realised how empty this area of the city was, everything was burning, it was a city of ghosts. I believed they would drop a bomb on us as we walked. But we arrived to the school.

From the UNWRA school, we went to very distant relatives – my uncle’s wife’s relatives. We had nowhere else to go; we stayed three days. We wanted to go home, but we expected after people had left, the army would shell the whole of Tela Howa. After the army withdrew, my father and brother went to check our home and bring our passports and ID. After the ceasefire we went home. But we can still hear shelling from the sea. We think it’s not really a truce, it’s more just a break.

I lost my friend from the WhyNot project – Christine Al Tork. She was really dear to me, she was one of the sweetest girls, kind of smooth and soft. Her parents only had her and her brother, so they took such care of her, and gave her so many opportunities, she took lots of classes and things…she was literally scared to death. She got asthma and then a heart attack, from fear. It was Friday, the day she died. I began to think it would happen to me too, because I was scared to death too. I was so affected by that, my family tried to be very close to me to help me. I looked on Facebook, her friends made an online group for her, and the photos of her after she died affected me so much; one of her father kissing her goodbye for the last time. I couldn’t believe she would never be back.

Then I heard my friend from college, Bissam – her name means spring – was dead. This shock was even worse. I was as pale as Christine after she died. I couldn’t eat or talk. My uncle wanted to wake me out of my shock. He shouted at me – it’s not the time for this – any of us might die at any moment, but we have to try to survive – show some care for yourself, for your family, wake up! I realised I had to find some strength, so I started to eat.

Some of my relatives live in Tuam. Their building was destroyed; six families lived there. My friend’s home was destroyed by shells. Some other relatives had their home burnt, so did another friend. Then yesterday I went to Mercycorps, and I found out my friend Jihan, who worked at Sharek, is dead. I was listening to everyone’s stories and I wanted to escape from reality but it was chasing me. During the attacks, I was calling all my friends every night to say goodbye, I was saying to all of them, please forgive me for any bad things I did. And they would say, Reem, please shut up!

My friends always used to say I was like a character out of a fairy tale, like Snow White or someone, not really living in the real world. After these days, I guess I am in the real world. I can’t watch the news, because the news was us, my life, my friends. All me and family are thinking about now is leaving Gaza.

Those minutes or hours – I literally couldn’t tell you which – when I went out into the street with the amazing Red Crescent medics to meet all the families like Reem’s, who were fleeing for their lives, were a strangely calm time. One of the guys paired up with me, and would quietly say my name and “come” to direct me where we needed to go, firstly with hands in the air but soon holding children and blankets and old people. I saw men crying, children wanting to run from sheer terror and their parents gripping them tight, women clutching babies buried in blankets. We carried several people on stretchers, stopping to bandage the sniper wound of one man on the way.

A's building where young girl is, tanks were where white car is

Towards the end my Red Crescent comrade B realised that we didn’t have his best friend A. He wasn’t answering his phone, and that his building was closest to where the tanks were. He asked me to come and get him (I have this trick of untying my long hair to be clearly visible as a woman, in case it discourages shooting, though in the circumstances I wasn’t convinced it would help) and after an eerie walk through emptiness, we found ourselves within a hundred yards of the tanks. From the next building we called across and discovered several families remained in it but wanted to leave. First they couldn’t find A, but then they did – and I swear he’d slept through the whole thing, with a tank nearly under his window and deafening shelling going on. And we all got back safe.

In these last days, whenever Red Crescent folks from other places turned up on ambulance runs, the greetings were much closer to reunions. Big hugs and 5 or 6 smacking kisses on each cheek. The subtext: “you’re still alive. It’s a miracle, you’re still alive.” E heard today of a third friend who is dead. She has had a hard time. I have lost no-one personal to me.

I have three hangovers that I’m aware of from these days. One, I hate to sleep alone at my flat; the two nights I did during the attacks, it felt too far from the hospital where my work and my friends were and I was worried I would be cut off from them. It still somehow feels like being in the wrong place. Two, I feel happiest when my 3 best Red Crescent friends are all present and within my sight. Three, in the dark when I see bags of rubbish on the street I think they are bodies. This is because I found, when we went to pick up bodies lying in the dark, that they looked more like crumpled bags of rubbish than the people they had been.

The strength of Gaza people astounds me. Everyone was out today fixing things. Re-laying water pipes, clearing rubble. Putting aside the thoughts of the children who are dead, to smile for the children who are still alive. How is it done? Where do they find the courage? And what will be their reward for getting up and going on, one more time?

I forgot to tell you that today again I woke to the sound of shelling from Israeli ships in the Gaza sea. (Since I interviewed her, Reem has written her story in her own words.) 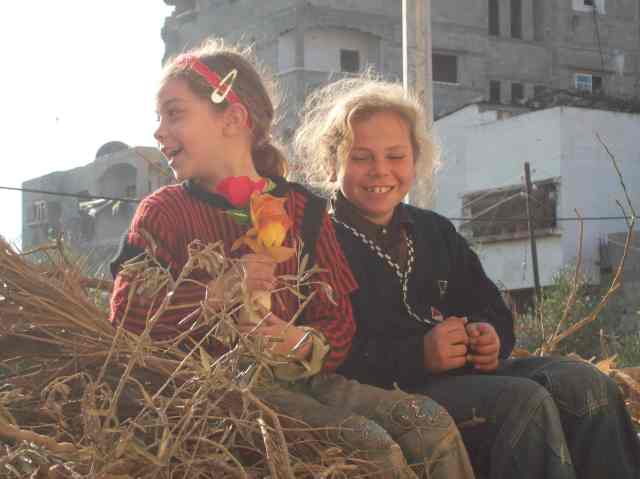 This entry was posted in Uncategorized and tagged gaza, middle east, palestine, war. Bookmark the permalink.